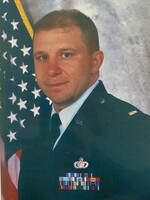 James Allen Benvenuto, 51, of Dawsonville, GA passed away on Friday, March 18, 2022, at his residence. He retired from the United States Air Force after 27 years. While serving he reached the rank of Major, he served during Iraqi Freedom, Desert Storm, Global War on Terrorism, Iraqi War, and the Afghanistan Campaign. During his tenure in the Air Force, he served as a Security Officer and various other positions in Saudi Arabia, Kuwait, and Afghanistan. He had a love for outdoor adventures and his dogs. He was a loving son and brother.

He is preceded in death by his brother, Adam Michael Benvenuto.

A Funeral Mass will be held on Saturday, April 2, 2022, at 11:15 a.m. at Christ the Redeemer Catholic Church, Dawsonville, GA with Father Brian Higgins officiating.

Condolences may be left online at www.beardenfuneralhome.com

All rights reserved. This obituary is also archived at obittree.com