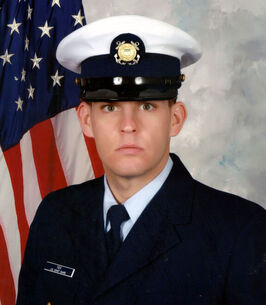 Petty Officer First Class Ryan Nix, 44, of Bedford, Kentucky and formerly
of Dawsonville, Georgia passed away suddenly on Friday November 4,
2022.
Born August 1, 1978, Ryan was a 1997 graduate of Dawson County High
School. He served in the U.S. Army in Iraq during Operation Iraqi
Freedom where he earned numerous awards and medals, specifically a
Combat Infantry Badge that he was extremely proud of. Following his
service in the U.S. Army, he enlisted in the U.S. Coast Guard where he
was currently serving and had also earned many awards, including the
Cutterman Pin and Sailor of the Quarter. Ryan was a devoted and
loving husband and a hero to his son. He never met a stranger and
lived every day to the fullest with a laugh and a smile. He was preceded
in death by his father, Walter Lamar Nix; maternal grandparents, Hon.
James Cliff Hughes and Frances Jones Hughes; paternal grandparents,
Lucius Nix and Claudine Robinson Nix; grandfather-in-law, Curtis Leonard
Chappell.
Surviving are his devoted wife of 16 years, Cara Carlisle Nix; son, Ryan
Chayden Nix, age nine; mother, Julie Hughes Nix and John Simpson of
Dawsonville; brother and sister-in-law, Wyatt Anthony Nix and
Stephanie Nix of Dawsonville; father-in-law and mother-in-law, Billy
Carlisle and Cathy Carlisle of Dawsonville; grandmothers-in-law, Leila
Chappell, Joyce Carlisle, both of Dawsonville; numerous aunts, uncles,
nieces, nephews and a host of beloved friends and military coworkers
near and far.
Funeral services will be held on Saturday, November 12, 2022 at 3 p.m.
at Lighthouse Baptist Church in Dawsonville. Dr. Charles Blackstock and
Rev. Chad Rogers will officiate. The service will be live-streamed at
www.lighthouse-baptist.com. Interment will follow in Harmony Baptist
Church Cemetery.
The family will receive friends at the funeral home on Friday November
11 from 2 p.m. until 8 p.m. and on Saturday from 12:30 p.m. until 2
p.m.
In lieu of flowers donations may be made to Coast Guard Mutual
Assistance at www.cgmahq.org.
Condolences may be expressed at www.beardenfuneralhome.com.
Bearden Funeral Home, Dawsonville, GA.

All rights reserved. This obituary is also archived at obittree.com